Worcester State University has joined up with hundreds of other schools to participate in RecycleMania, a nationwide recycling competition spanning eight weeks from February 3 to March 30.

For its first year, the University is participating in two of RecycleMania’s eight categories. The “Per Capita Classic” measures how much recycling is done per person on campus, and the “Grand Champion” category measures what percentage of total waste is recycled.

Sustainability Coordinator Stephen Bandarra’s goal is to increase recycling on campus by 50 percent.

One of his major efforts has been to make sure that there are no lone trash cans or recycling bins on campus—that they always come in pairs.

“I want recycling to be as easy as possible for people,” Bandarra says. “The choice to recycle is only the choice to move your hand a few inches.”

The student-run Environmental Advocacy Group (EAG) has also become involved in RecycleMania by working with Bandarra and the Office of Sustainability interns to raise signs and promote recycling awareness.

EAG President Dominique Seles knows that it is important to be proactive when it comes to recycling.

“Look at the label of everything you throw away to see if it can be recycled,” Seles says.

Seles encourages students to read the labels on the recycling bins around campus to see what can and can’t be recycled, noting her own surprise that brown paper towels are among those that can.

The University’s zero-sort recycling system means that the various types of cardboard, paper, plastic, glass, and metal displayed on these labels all go in the same bin. Bandarra knows that some students might find this strange.

“If you come from a town where you sort your recycling, it might feel weird to put paper and plastic in the same bin,” Bandarra says.

Despite the fact that there are 522 schools currently registered for RecycleMania, Bandarra and Seles are both confident that WSU can place.

“It’s not impossible,” Bandarra says. “People here want to do the right thing, and we just need to help them with the knowledge.”

In fact, WSU’s numbers are already on the rise. For the first week of the competition, WSU is reporting a recycling percentage of 40 percent, up from 27 percent, due to a composting system that the Office of Sustainability has put into effect in conjunction with Chartwells.

With this system, excess dining hall food, which would have ended up in a landfill, is now brought to a commercial facility to be turned into compost.

Bandarra is optimistic that RecycleMania will raise student, faculty and staff awareness. He hopes that WSU will eventually become carbon neutral.

Students who would like to become involved in RecycleMania are encouraged to contact the Sustainability Office, room 166 in the Learning Resource Center. 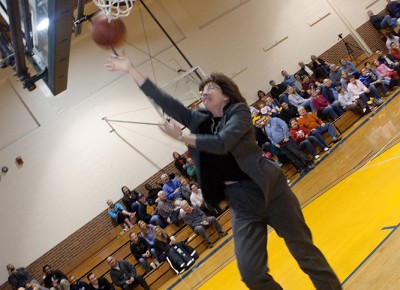 The last home games for the men’s and women’s basketball teams marked a sentimental occasion for Worcester State University Lancer Athletics alumni as well as current student-athletes. They were . . .