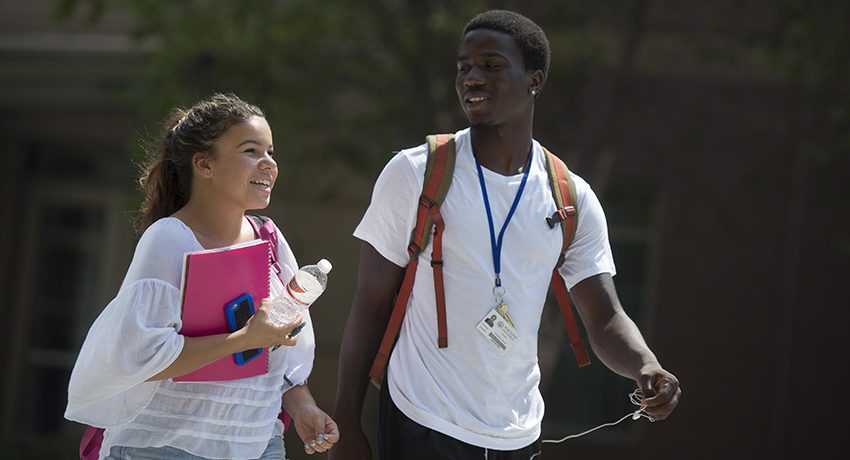 This fall, Worcester State University is welcoming one of the largest, most diverse and most academically prepared first-year classes in the University’s history. The class also is a majority “first-generation,” where less than half of the incoming students’ parents completed college.

Director of Admissions Joseph Dicarlo said there will be 911 first-year students enrolled when classes start September 6. “We are expecting our largest freshman class in the last six years,” he said.

WSU also will welcome about 515 transfer students this fall, bringing the new-student headcount up to 1,426, a five percent increase over last year’s total of 1,357. The most common majors among first-year students are biology, business administration, criminal justice, nursing, and psychology.

“Students are choosing WSU in greater numbers because of the quality education, wide variety of academic options, relatively low cost, and community feeling on our beautiful campus,” Vice President for Enrollment Management Ryan G. Forsythe, Ed.D., said. “With new students from all corners of Massachusetts, the region, and around the world, Worcester State is delighted to start the new academic year with such promise.”

Those students, have developed good study habits, apparently. “The academic quality has been pretty consistent, but it has gone up each year, which is nice to see as well,” said DiCarlo.

Fifty-one percent of the new students, including transfers, hail from Worcester County, Dicarlo said, with 93 percent from within Massachusetts.” Nineteen states beyond Massachusetts are also represented. “We’ve got four students from Florida, three from New Hampshire, three from Maine, three from Michigan and two from New York,” he said.

Overall, 19 states are represented, including one student coming all the way from Hawaii. “She basically just found us on the website and liked what she saw and made a connection with a staff member in our office and ended up just exploring the university and deciding to deposit,” Dicarlo said.

Additionally, 51 percent of new students are the first generation in their families to attend college, and 40 percent of them, or 633 new students, plan to live on campus. That on-campus percentage has roughly doubled since the early 2000s. The incoming class also signifies an increase in the diversity with 35 percent identifying as students of color, whereas 27 percent of last year’s student body identified as such.

Another highlight this year is a 25 percent increase in students coming from the Worcester Public Schools. Dicarlo said 134 of the 911 first-year students graduated from the city’s public high schools. “We’ve done more consistent outreach with them, and I think the completion of all the construction projects like the opening of our Wellness Center and the new dining hall has been an attraction for Worcester public school students,” he said.

A new enrollment initiative that paid off was the several on-the-spot decision days the WSU admissions staff did last December. “We visited all the Worcester public high schools, and basically students were allowed to receive an admissions decision on the spot,” he said. “It creates a lot of great buzz around the admissions process, and the students were pretty excited about it so that’s one of the things that helped.” He applauded Worcester Superintendent Maureen Binienda, who played a major role in facilitating the on-the-spot decision events.

Economic considerations also favor WSU in the eyes of prospective students and their parents. Students these days are carefully considering the return on their investment, and Worcester State offers a high-quality education at about a third of what it would cost to go to a private school, Dicarlo said. “They’re seeing that they can come here, get a good education, but not take on a lot of debt—and that seems to be resonating with a lot with families.”

“We’re really excited about the incoming class,” he said. “It’s been the support of the entire university that helped make it happen.”

Worcester State University President Barry Maloney is among Massachusetts college and university leaders speaking out against hate groups after a counter-protester's death in Charlottesville that was . . .