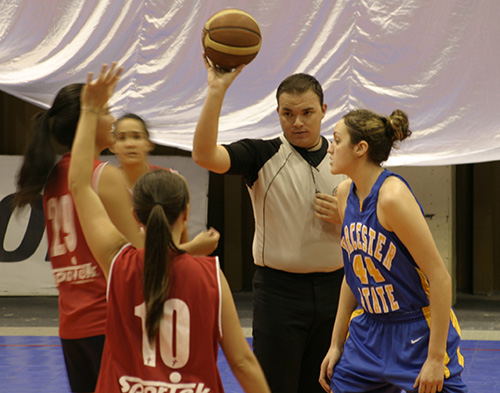 On December 29, after a breakfast of the local specialty gallo pinto, the team boarded a bus to San Ramon, a beautiful suburb of San Jose, anchored by a large, magnificent cathedral. There, at the Gimnasio Rafael Rodriquez, the Lancers practiced and then held a clinic for 20 San Ramon boys and girls and their families. There were no language barriers teaching round ball, as the drill stations included passing, shooting, dribbling and culminated in round-robin, half-court games. The appreciative Costa Ricans were all smiles as they learned new and fun drills.

On December 30, at the roomy gym at the Costa Rican Tennis Club in downtown San Jose, Lancers competed against the Costa Rica national team. Rife with sharp shooters and quick players, the rested Costa Rican team made the Lancers look a bit weary from travel, and Worcester State University took one on the chin.

After the New Year’s holiday, the Lancers left for San Pedro, a suburb of San Jose, and held a second clinic for local youths at the open air facilities at Santa Cecilia’s, a private high school. There, the locals were a bit older and very skilled. The Lancers conducted various shooting and passing drills in the bright sunshine.

Meanwhile, the travel party anticipated the evening’s rematch with the Costa Rica national team at Sanez Flores Gimansio in San Pedro. The exciting atmosphere in the gym peaked as the Lancers began to nip into an early lead by the Costa Rican team. By half time, the Lancers had the lead and the friendly crowd became increasingly animated by the high level of aggressiveness and skill that the two teams displayed. The passes were crisp and the shots were falling.

In the third quarter, the Lancers score went up 7 points before the national team’s coach called a time out. Soon after the teams were knotted again, as the tenacious Costa Rican defense created some key turnovers. A late 3-pointer by the Lancers again brought the game within reach, with 1:24 to play, but it wasn’t enough. With a late surge, the Costa Ricans defeated the Lancers 69-61.

Both teams and their fans applauded one another, and, as is customary when playing internationally, the Lancers presented Worcester State University shirts to the Costa Ricans. In all, it was an uplifting night that established a deep cultural connection between teams and nations.

The following day, the Lancers saw dawn again while preparing to depart for home. Nevertheless, many in the party, including the principals of Beyond Study Abroad, felt a wonderful partnership had been formed, and discussions will follow as to how Worcester State University and Costa Rica can continue to cultivate the goodwill between our schools, our young people and our nations.

Submitted by Mark Wagner, director of the Center for Service Learning and Civic Engagement, and Women’s Basketball Coach Karen Tessmer

‘The Ladies’, as the evening's guests referred to the half sized statues, are three earthen figures, from the 3rd century BC, in Puglia.  There are less than 100 are in existence, only nine in . . .