On Wednesday, April 3, the Community Leadership Experience at Worcester State (CLEWS), along with friends, traveled to New York City to tour the Museum of Jewish Heritage, as well as the 9/11 Memorial. The trip was sponsored by the Center for Service Learning and Civic Engagement and the Office of Residence Life.  Thirty-four students attended. The purpose of the trip was to consider two recent historical events that pose questions about the nature of human violence and our response to violence. And the two sites were fitting representations of both the despair brought on by history and the hope that endures, even in the face of evil. The Museum of Jewish Heritage sits on the water in Battery Park, overlooking the Statue of Liberty, and has a garden designed and built by Andy Goldsworthy. The garden is a collection of boulders that are hollowed out to allow trees to grow through the center – life triumphing through human agency, and a powerful a symbol of hope.  The exhibits of artifacts celebrate the Jewish religion while documenting the horrors of Nazism.

“Having a tour guide who had lost family members in the Holocaust brought a whole new element to the experience,” Stephanie Parretti ’13 said. “She was able to add personal anecdotes of the horrors through which her loved ones suffered. I know a lot about what happened during this time period, but the addition of this new information made it more interesting and educational.”

Later in the day, the CLEWS crew traveled to the 9/11 Memorial, where two fountains also present a symbolic rendering of loss and life. Surrounding by steep rims with the names of the men, women and children who died in the terror attacks of September 11, 2001, and February 26, 1993, cascading waters team and reflect the sunlight as the water tumbles into a deep well.  Many visitors are first overcome with emotion at the sight, and while the memorial is not yet finished, it is a fitting tribute to the fallen. Although the 9/11 Memorial is still under construction, it was worthwhile to visit the site that is made up of two giant square fountains in the ground. Walking up to the end of each fountain and peering down into the memorial was very overwhelming.

“I started crying almost immediately,” Parretti said. ” It is such a touching, yet simple representation of what was lost that day. We remember that it wasn’t just the buildings, but all the lives lost when we see the individual names of all those who perished on that day, including those who worked in the buildings, those on each of the four flights, relief workers and pentagon employees. Included with one of the names were the words ‘and her unborn child.’ I thought it was a nice touch that allows visitors to connect the names with real people who had lives and families.”

This trip to New York City was a mixture of planned group visits to historical and educational locations and free time. In small groups, students were able to plan for a few hours of personal time to explore the city. Some chose to rent bikes through Groupon, some went shopping, some went to the top of the Empire State Building. As one student recalled, “Although I’ve visited New York many times, even staying in a hotel in Times Square, I had never visited Central Park. Ga is a Korean student studying abroad here at Worcester State University. We had such a fun time together and it made me happy to see her enjoying the city so much.”

Submitted by Mark Wagner, director of the Center for Service Learning and Civic Engagement 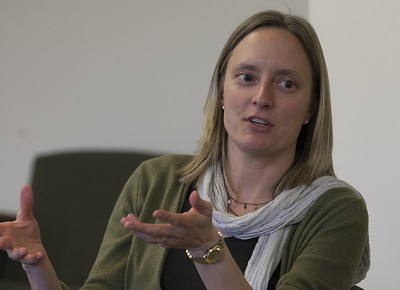 Much of what scientists know about the global impacts of volcanoes can be traced to the little-known eruption of Icelandic volcano Laki in 1783, which sent plumes of lava higher than the Burj Khalifa . . .