Worcester State College alumna Dorothy “Dottie” Manning, founder of the “Walk to Cure Cancer” in Worcester, will serve as the 2009 Commencement Speaker at WSC, Sunday May 17th at 1:00 p.m. at the DCU Center.  In addition, the college will honor philanthropist and business leader Melvin S. Cutler with the Worcester State College 2009 community service award.  The College will also award Abby’s House Founder Annette Rafferty an honorary degree.  “We are so very fortunate to have leaders such as these three outstanding individuals in our midst,” said WSC President Janelle Ashley. “We are so proud of their incredible commitment.”

Manning’s commencement address will coincide with the first scholarship being awarded to a deserving Occupational Therapy student in her son’s name.  Dottie and her late husband, Dan, founded The Dan Manning, Jr. Occupational Therapy Scholarship Fund at Worcester State College and the Our Danny Cancer Fund at the UMass Cancer Center following the tragic death of their son Danny. Danny, a WSC Occupational Therapy major, died in 1994 from complications caused by his treatment for leukemia, just weeks before his 21st birthday. Dottie’s dedication to preserving Danny’s memory continued even after her husband’s death of esophageal cancer at age 47 two years later.

Manning, whose son Richard graduated from WSC in 2006, is now the director of Our Danny Cancer Fund, a position she assumed in 2001 at the conclusion of her 13-year career as a guidance counselor at Assabet Valley Regional Vocational High School in Marlborough. She also serves as a volunteer for the Marlborough Regional Chamber of Commerce. Manning earned her Master of Education degree in Counselor Training from WSC in 1988 and her Bachelor of Science degree in Education from Framingham State College. Her past volunteer service includes co-facilitating a local bereavement support group and working as a court-appointed special advocate. She received the Worcester Business Journal Health Care Heroes Volunteer Award and the Greater Marlborough Good Scout Award in 2006.

In recognition of his extraordinary leadership in philanthropy, and business, Worcester State College will honor Melvin S. Cutler with the 2009 Community Service Award at its 2009 Commencement. “His incredible generosity and keen business sense makes him an honoree that is sure to inspire our graduates,” said Worcester State College President Dr. Janelle Ashley.

Through the Melvin S. Cutler Charitable Trust, employees and customers are involved in charitable decisions for the multimillion dollar foundation. Cutler has volunteered as a supporter and guest lecturer for the Upward Bound Program through the Office of Multicultural Affairs at Worcester State College. His wife Sandra is al alumna of the WSC Class of 1976.

Melvin S. Cutler is founder of Cutler Associates, an architecture, engineering and contracting firm in Worcester and is an owner and registered investment advisor of Cutler Capital Management. The company has designed and built projects at Bancroft School, Assumption College, the University of New Hampshire, Clark University, WPI, Nypro and American Superconductor. Cutler also built a fire/crash rescue station for Otis Air National Guard base on Cape Cod. Among its 35 elder care and assisted living facilities are Beaumont, Whitney Place, Christopher Heights and the Eisenberg Assisted Living Residence and The Willows. He also served as founder and treasurer of Flagship bank in Worcester and Madison Bank in Florida.

ANNETTE A. RAFFERTY TO BE AWARDED HONORABLE DEGREE

Annette A. Rafferty, founder of Abby’s House, will receive an honorary degree as part of the college’s commencement.  Abby’s house is a multi-service organization serving the needs of homeless, abused and low-income women and children, that has grown into an organization that offers shelter, supportive long-term housing, a women’s center, meals, community education, thrift shop and domestic violence services. In June 2009, Abby’s House will celebrate 33 years in the Worcester community, thanks to the support of dedicated staff and nearly 200 volunteers. “Annette Rafferty has improved the lives of countless women, children and families in our region,” said WSC President Janelle Ashley, “the college is so proud of our many partnerships with Abby’s House.”

Rafferty was educated in the Worcester and Oxford public schools and went on to receive a bachelor’s degree from The Elms College and Masters Degrees from Assumption College and the Ecumenical Institute. She taught as a secondary school teacher from 1952 to 1971 and as a community administrator with the Sisters of St. Joseph of Springfield from 1971 to 1979. She received the Via VERITAS Medal from her Alma Mater in 1983.

In addition to her role as a founder of Abby’s House, she served as a board member and chairperson of the Worcester City Manager’s Committee on the Status of Women, a member of the Rape Crisis Board and a trustee of The Elms College.

Among her many honors are the awarding of the Boston Globe’s Jefferson Award for Public Service; the Citizen of the Year award from the Worcester Telegram and Gazette; the City Manager’s Women of Consequence award; Worcester State College Public Service Citizen Action Network award; Worcester Rotary Citizen of the Year award; the Janice Nadeau Housing and Community Service award from the Central Mass Housing Alliance; and grand marshal of the St. Patrick’s Day parade.

Annette is also the author of Wearing Smooth the Path:  25 Years at Abby’s House, an Unfinished Memoir, published in 2001 by Ambassador Press. 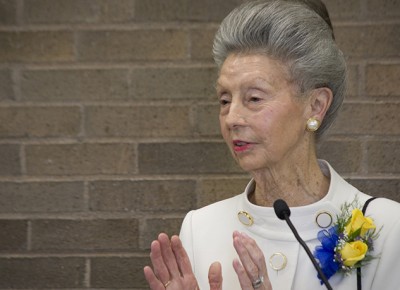 Worcester State College will pay tribute to the contributions James B. and Maryanne N. Kenary have made to the Worcester community by featuring them as the guests of honor at the 2009 Scholarship Tea . . .