In an effort to assure students who are affected by President Donald Trump’s travel ban and mass deportations, the Worcester State chapter of the Massachusetss State College Association (MSCA) recently issued a statement declaring support for those students at risk and affirming solidarity with the greater Worcester community.

The letter was sent to Worcester State faculty and adjunct faculty, to the leadership of the other unions representing Worcester State employees, and to the other eight state universities, according to Donald Bullens, an associate professor of communication and president of the Worcester chapter of the MSCA. The communique expresses “solidarity” with students, faculty, staff, and administrators, and is similar in tone to a statement made by Massachusetts Commissioner of Higher Education Carlos Santiago. President Barry Maloney forwarded that statement to the campus on February 7, expressing his support for it, saying, “My aim is to ensure that students, faculty, and staff are able to learn and work in a welcoming and safe environment.”

In an interview regarding the MSCA statement, Bullens said, “The MSCA believes and supports diversity, and we welcome all students, no matter what their background is.”

This week, President Trump has signed a new executive order that temporarily blocks visas from being issued to citizens of six majority-Muslim countries, revoking and replacing a controversial, now-suspended executive order known as the travel ban. Like the initial order signed on January 27, the new executive order bars arrivals from specific majority-Muslim countries for 90 days and suspends the entire U.S. refugee program for 120 days. It also caps the total number of refugees admitted this fiscal year at 50,000, instead of 110,000, according to National Public Radio.

Although the revised ban has incorporated changes, including the exemption of Iraq and green card holders or existing visa holders, Bullens expects to see more of the same turmoil that the country saw in January.

“Even though the president’s original executive order was halted, you could see what a negative atmosphere we created,” Bullens explained. “By banning these Islamic countries, our government is using blanket stereotypes to harm innocent people. It’s just chaos.”

He also said the Worcester State faculty are wasting no time in taking action. “We currently are forming a faculty group that will explore emerging social and political issues that may impact our students,” said Bullens.

But what can faculty members actually do?

As for what to expect with the President’s revised travel ban, Bullens admitted that “we are sailing in unchartered waters.”

“We don’t know what will happen with this administration, and where the travel restrictions will go from here, but declaring our support is a start. There will most certainly be more challenges that will come down the road.”

Despite the turmoil that the situation has created throughout the nation, Bullens said that he was pleased with the support and encouragement that the MSCA has gotten from members of the campus community. 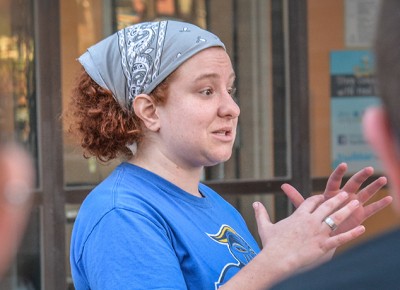 Momentum to Take Active Minds to the National Level

At a time when the mental health of college students is a primary concern, junior nursing major Elizabeth Dugas has watched the membership of Worcester State University’s Active Minds chapter flourish under her leadership. The first Active Minds chapter was founded in 2000 by a University of Pennsylvania student who lost her brother, who also was a college student, to suicide. “She . . .