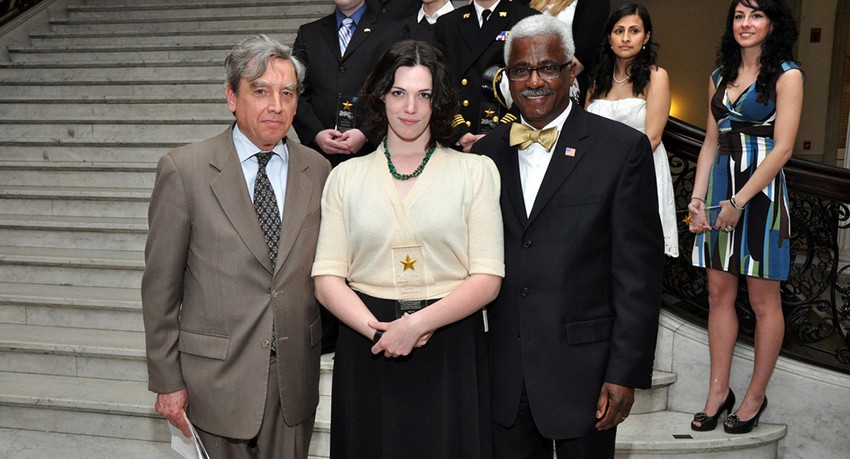 WSU Student Among 29 to be Honored by Governor Patrick

Worcester State University’s Maureen Carroll of Leicester is one of 29 outstanding 2011 graduates of Massachusetts community colleges, state universities and the University of Massachusetts who will be honored for both academic achievement and their contributions to the Commonwealth in a 29 Who Shine ceremony at the State House on Thursday, May 12, according to Higher Education Commissioner Richard Freeland.

Carroll will graduate from WSU on Saturday, May 14.

Carroll is majoring in geography and urban studies at Worcester State University, where she has demonstrated academic excellence, effective leadership on campus and in her service to the greater Worcester community. Maureen is a Dean’s list scholar with a GPA of 3.692 and is the 2011 recipient of the Urban Studies Department Academic Achievement Award. In addition, she is the 2011 recipient of the Earl Shaw Award in Geography. She serves as president of Gamma Theta Upsilon (GTU) Geography Honor Society.

Carroll volunteers at Empower Biodiesel Cooperative and serves as an intern at Neighborworks.  At Empower, she coordinated a comprehensive outreach campaign to identify restaurants willing to contribute Waste Vegetable Oil (WVO) that will be refined into biodiesel. Maureen was able to recruit dozens of restaurants that now divert WVO from the waste stream to a social enterprise that provides economic opportunities for ex-felons.

At Neighborworks, she is focusing her efforts on the effects of the foreclosure crisis in Worcester County.  This is an issue that has affected her life personally and working at Neighborworks has clarified her vocational choice in life. Maureen has presented the results of her engaged community research both at WSU’s annual Celebration of Scholarship and Creativity and the Mass Commonwealth scholar’s conference.

Carroll has been studying organization management literature and has developed exercises that will improve workplace culture and efficacy in cooperative enterprises. Cooperative and community enterprises have received considerable attention around the world as an alternative way of engaging citizens in the process of sustainable and equitable economic development. Her volunteer efforts have been focused both locally and internationally.

She was tireless in her efforts coordinating the restoration of the Candace Scola Memorial garden, dedicated to a Worcester State student who was a tragic victim of violence.  The restoration of this garden required hundreds of volunteer hours to remove invasive weed species.

Carroll also conceived of two fundraising projects to support a village school in Tanzania. Maureen exhibits an unusually high degree of fidelity to all her undertakings and exhibits great care towards her peers, other students and her family.

As a group, the student honorees range in age from 17 to 52. They hail from each of the state’s 29 public higher education campuses, which are located in 25 cities and towns across Massachusetts. Each student was nominated for the “29 Who Shine” award by faculty and staff at the individual campuses.

“Each one of these student is a success story in her or his own right and as a group they remind us of the power of public higher education to change lives,” said Massachusetts Education Secretary Paul Reville. “Their achievements affirm the Patrick-Murray Administration’s commitment to supporting and investing in our public colleges and universities.”

Noting that Massachusetts public college and university graduates will form the bulk of the state’s future workforce, Commissioner Freeland said the students have already contributed to the state’s civic well-being by serving their communities and preparing to work in high-need areas of the Massachusetts economy, such as the STEM fields.

“Individually and collectively, these students have proven themselves and shown that they will make significant contributions to our state’s future,” he said. “They’ve studied hard to prepare for productive careers, but they’ve also made time to engage in the civic life of their communities, and Massachusetts is better off because of these efforts.”

In addition to the awards received at the May 12th ceremony, the students will be honored with donated full-page and half-page advertisements appearing on May 12th in most daily newspapers across the state. 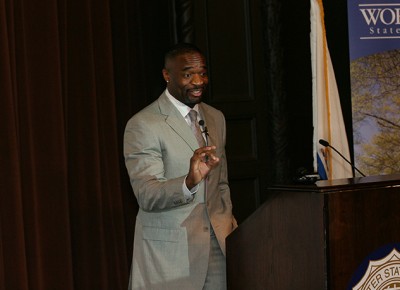 Students Urged to Imagine Their Future at Dr. Aisiku Lecture

Students were urged to imagine all the possibilities their futures could hold at the recent Worcester State University lecture "Developments in Medicine and Neuroscience: A Physician's . . .